Persistence is an important attribute for a scientist. Sometimes one must try over and over before an experiment comes out “right.”  Did you know persistence also played a big part in getting Thanksgiving recognized as the holiday we know today?

“Mary Had a Little Lamb” is probably a nursery rhyme you’ve known since childhood. But, did you know the author of this poem was largely responsible for the establishment of a national Thanksgiving holiday in this country? Sarah Joespha Hale campaigned for nearly 20 years to get Thanksgiving “officially” recognized.

During her campaign, which spanned five presidents before she found one who would take her idea seriously, she continually lobbied congressman, wrote editorials, sent letters to each state governor, as well as to U.S. presidents. Finally her persistence paid off when she was able to convince President Abraham Lincoln that this holiday would help unify the country after the Civil War ended.

Lincoln declared the last Thursday in November as a national day of thanksgiving. From that point on, until Congress officially set the date of Thanksgiving into U.S. law in 1941, every U.S. president, with the exception of Franklin Roosevelt, would annually declare the last Thursday in November as the recognized day in the U.S. for giving thanks.

What about FDR? Remember we were just coming out of a deep economic  depression. He changed the date of Thanksgiving to the second to the last Thursday in November in 1939-1941 in order to extend the Christmas shopping season by a week. Unfortunately only about half the states went along with him; most stuck with the last Thursday tradition. Texas, on the other hand, decided to take both days as a holiday. That confusion ultimately led Congress to step in and officially set the date to the last Thursday of November.

Why do we eat the foods we do on Thanksgiving?  Again, you can give credit back to the persistent Hale. In her editorials she outlined various recipes she recommended to be used for the Thanksgiving feast. These things that would not have been served at the Pilgrim’s thanksgiving dinner, but common to ours included turkey, stuffing, pumpkin pie, sweet potatoes, mashed potatoes, and cranberries.

So just like budding scientists who see a problem and work to try to figure a solution, we celebrate and are thankful for the persistence of Sarah Joespha Hale, who fought so hard for a national day of thanksgiving! Enjoy the food-related science activities we bring to you this month from our Colorful Caroline, Kitchen Chemistry Kal and Gilbert Gas book. More importantly, enjoy and offer thanks for the family and friends who gather with you to celebrate the season. Happy Thanksgiving! 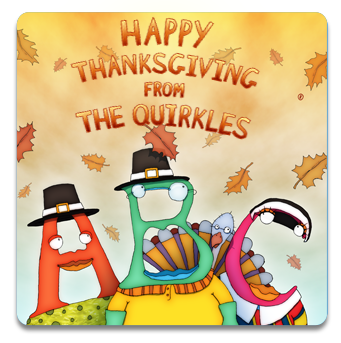