This month we often say love is in the air. If that’s the case it must be in small quantities because by volume, dry air contains 78.09% nitrogen, 20.95% oxygen, 0.93% argon, 0.04% carbon dioxide, and small amounts of other gases. Instead of love, this month we focus on one of those elements: oxygen.

Poor oxygen. How can something so important be so taken for granted? It’s essential for life. Oxygen is the third most abundant element in the universe. Just five elements make up more than 90 percent of the weight in the Earth’s crust. Almost half of the weight of the crust comes from oxygen. (Silicon, aluminum, iron and calcium are the other four main elements in the crust.) There is more oxygen inside your body than any other element, and at least 21% of Earth’s atmosphere is made of oxygen.

But what do you really know about this colorless, odorless, and tasteless gas that helps sustain life on this planet? Oxygen is really, really old. It’s been on Earth for at least 2.3-2.4 billion years! But even though oxygen has been around for a very long time, it took until 1608 for people to notice. A Dutch inventor named Cornelius Drebbel was working on an experiment when he noticed a mysterious gas being released. (Some say Leonardo da Vinci first proposed that air was made up of two gases, one for breathing and one for fueling fire earlier.)

By the 1770s, at least three different chemists were trying to solve the mystery of this unknown gas. In 1771, a scientist named Carl Wilhelm Steele discovered oxygen, but he never published his findings. A chemist named Joseph Priestly realized that the flame of a candle burned brighter in the mystery gas in 1774, and he did many other experiments to learn more about the gas. A third chemist, Antoine-Laurent de Lavoisier finally gave the gas a name: oxygen. Oxygen’s name comes from the Greek oxy and genes, which means “acid-forming.”

Oxygen (O2) is unstable in our planet’s atmosphere and must be constantly replenished by photosynthesis in green plants. (Read Gilbert Gas.) Without life, our atmosphere would contain almost no O2. If we discover any other planets with atmospheres rich in oxygen, we will know that life is almost certainly present on these planets; significant quantities of O2 will only exist on planets when it is released by living things.

We’ve already learned that all living things on Earth use oxygen to breathe, but oxygen has many other uses, too. Oxygen is used to make steel and plastic, and liquid oxygen is one of the main ingredients in rocket fuel. It is also used in cars and airplanes. Fire uses oxygen to burn. Oxygen tanks help people with breathing problems live and breathe. They also help astronauts walk in space and scuba divers swim to explore the depths of the oceans.

This month learn more by reading the Quirkles book, Ollie Oxygen then watch our video to see how oxygen impacts a candle race.

So now you know it’s important to appreciate this incredible element! Oxygen is in more than just the air we breathe: it’s in the oceans, the Sun, dirt, rocks, plastic, cars, airplanes, and more. We need it to live, fire needs it to burn, and oxygen-producing plants make it all possible. Thank goodness for oxygen! 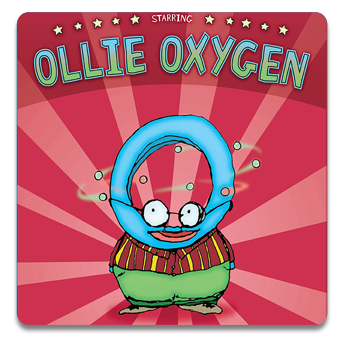