Don’t you just love the sounds of spring? The soft pitter-patter of drizzling rain, music and laughter as we head outside to enjoy nice weather, and of course, the chirping birds signaling the change of season.

We hear millions of different sounds every day and we tend to take this sense for granted. Sounds are waves which pass through our ears via vibrations and travel by vibrations of molecules. These vibrations occur whenever any object is struck or is made contact with. Every time any of these particle vibrations occur, our ears pick them up and we construe them as sounds. Slow moving particles create low sounds while particles that move fast make high sounds. This month we feature the Quirkles Susie Sound and explore the awesomeness of this sense.

There is no sound in space because there are no molecules there.  Here on Earth, we have air molecules which vibrate to our ears.

Sound travels slower through air than by water. In fact, the speed of sound via water is 4.3 times faster than by air. However, sound does travel far faster through steel than both air and water.

The loudest natural sound on Earth is caused by an erupting volcano. (Check out the Quirkles Vinnie Volcano.) In August 1883 the volcano on the island of Krakatoa erupted violently. The sound from this blast took roughly four hours to travel from the erupting volcano across the Indian Ocean. The loudest sound ever recorded, it reverberated around the globe seven times before diminishing. It could be heard 4,000 miles away, and people within 100 miles suffered permanent hearing loss.

Flies are not able to hear any sounds at all.

Most white cats that have blue eyes are often unable to hear sounds and are usually deaf.

Whale voices are able to travel a whopping 479 miles through the waters of the ocean.

Sound travels at a speed of around 767 miles per hour.

The majority of cows which listen to music end up producing more milk than those that do not.

Superior canal dehiscence is a disease that affects the inner ear and amplifies all internal sounds. It gets to the point where the sound of the eyeballs moving in their sockets sounds like “sandpaper on wood.”

The reason why we hate the recorded sound of our voice is because our skull changes the resonance of our voice from within and creates more bass. When we hear a digital recording of our voice, although slightly unfamiliar to ourselves, it’s exactly how other people hear it.

Elephants are so afraid of bees that the mere sound of buzzing is enough to make an entire herd flee. They have even developed a special rumble just to warn each other if bees are nearby.

So now that you have an impressive amount of sound trivia, check out our video where Chloe demonstrates how sound changes depending on how much water is in each of her “musical” glasses.  After you’ve finished this fun activity, go outside and enjoy the sounds of the season! 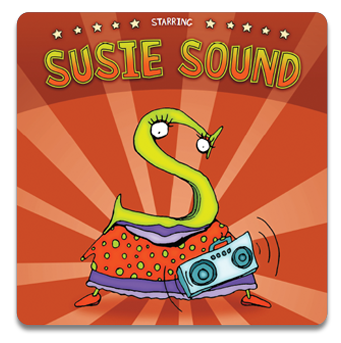