In our part of the world it’s cold right now! Not only do we have to bundle up, we have to pull out the winter boots to brave a bit of ice and snow. Anyone who has taken a tumble on ice in winter can appreciate the importance of friction.

Liquid smooths out a surface, creating less friction. For example, it’s harder for a car to stop on a wet (or ice covered) road than a dry one because the water creates a barrier between the car and the road. The tires don’t have as much contact with the road. Oil in a car engine lubricates the parts so they experience less friction. Friction causes heat, which can damage a car engine. That  same heat is good when you rub your hands together to create friction to warm them up.

This month we feature the Quirkles Friction Fred and how he solves his football team’s problem of falling on the slippery field. Our video demonstrates a very easy example of creating friction using only two things—a spoon and a nose!

So take a moment to appreciate friction. Imagine if we were constantly slipping—off our chairs, down the stairs, or on ice and snow. Life would be treacherous for sure! Thanks to friction, this does not happen. Stay warm this month! 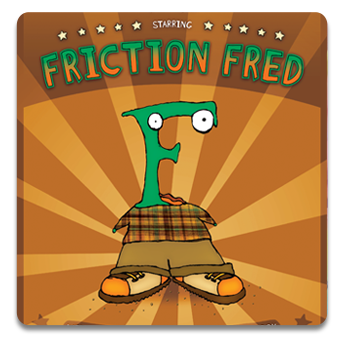