This summer as you head out on that last vacation and get ready to take off in that massive plane, ponder this. How is it that today’s airplanes, some of which have a take-off weight of a million pounds or more, are able to get off the ground and then around the globe high above the clouds.

Surprisingly, with today’s technological advances, airplanes use the same principles of aerodynamics used by the Wright brothers in 1903. In order to gain an understanding of flight, it is important to understand the forces of flight (lift, weight, drag, and thrust), the Bernoulli Principle, and Newton’s first and third laws of motion. The simple but awesome activity in our video focuses on one of those aspects: the Bernoulli Principle.

So what is the Bernoulli Principle? It states that as air moves around an object, it creates different pressures on that object. Faster air means less pressure. Slower air means more pressure. The key to flight is creating pressure upwards on a bird's wing or an airplane wing to keep it in the air.

The same principles that keep airplanes in the sky also apply to this month’s featured activity from our Jazzy Jet book. The main point is that moving air is at a lower pressure than still air. This is the Bernoulli Principle. In the case of the bottle in our video, the air that is blown towards the mouth is deflected around the sides of the bottle (very little moves past the piece of paper). This means that the air pressure in front of the ball of paper is lower than behind, and so the paper flies out rather than in, seemingly defying logic! Children will try this over and over!

After Jazzy Jet’s Huff and Puff Challenge, grab some paper, design different types of paper airplanes, and go outside to test them. What a great way to spend a summer day, having fun and learning about flight too! 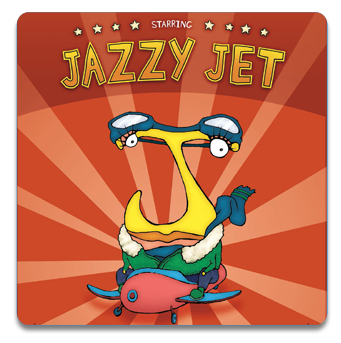