This month we consider motion, gravity, and Sir Isaac Newton (1643-1727) and demonstrate a very cool activity that reinforces Newton’s First Law of Motion (and gravity) in a fun and memorable way. All it takes is a raw egg, clear drinking glass, water, non-breakable pie plate and toilet paper tube.

But before we start “slinging” eggs, let’s learn a little about Sir Isaac Newton.  After all, he is considered one of the most important scientists in history. Even Albert Einstein said that Isaac Newton was the smartest person who ever lived. During his lifetime Newton developed the theory of gravity, the laws of motion (which became the basis for physics), a new type of mathematics called calculus, and made breakthroughs in the area of optics such as the reflecting telescope.

In grade school you probably learned Newton’s apple story around the time you learned about Washington cutting down the cherry tree and the Pilgrims celebrating the first Thanksgiving with their native American friends. Since neither of these stories proved to be true, you probably have your doubts about whether Newton actually sat under an apple tree and had a “eureka” moment concerning gravity, either.

It might surprise you to learn, then, that Newton was indeed sitting under an apple tree when he had his so-called “eureka” moment on how gravity worked.

Although, it took him over two decades more to develop the fully-fledged theory of “universal gravitation” and he also didn’t complete it without some ideas others had already come up with, such as Christopher Wren, Robert Hooke, and Edmond Halley (of Halley’s comet fame). So perhaps “eureka” is an exaggeration. From accounts, he was more just put on the correct path while musing under the tree.

Further, it would seem that the apple didn’t fall directly on his head- at least there is no documented evidence of this. But if you discount the notion that he near instantly fleshed out his universal theory and the “fell on his head” bit, the common story is pretty accurate.

And through that we begin to understand gravity, the mysterious force that makes everything fall down towards the Earth.

Newton is credited with many well-known quotes. Perhaps one of the most inspiring is this: “If I have seen further than others, it is by standing upon the shoulders of giants.” As for our budding Quirkles scientists and many, many others, they have stood on the shoulders of the giant Sir Isaac Newton. 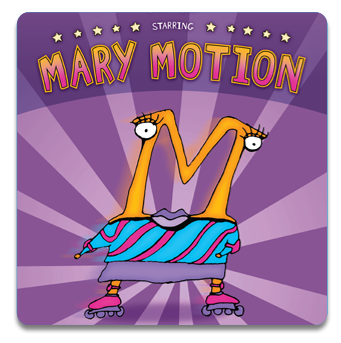