If you live close to an ocean, maybe you plan one more trip as summer winds down. Or if you live elsewhere, you may dream of your next trip to the seashore once things return to some sort of normal. Despite being beautiful and soothing to the soul, oceans are awesome in many other incredible ways, too. Here are six surprising facts you maybe didn’t know.

*About 70 percent of the Earth's surface is covered with water, yet the oceans largely remain a mystery for scientists. More is known about the Moon's surface than the depths of the ocean. In fact, 12 people have stepped foot on the Moon, but only three have been to the Mariana Trench—the deepest part of the ocean, roughly seven miles deep.

*Though 94 percent of life on Earth is aquatic, about two-thirds of all ocean life is still unidentified. New species are constantly being discovered. Recently a red species of sea dragon that lives in shallow waters off the western coast of Australia was discovered. Other new finds have included what may be the world’s ugliest fish, as well as a ghostly octopod and a “ninja” shark with a dimly glowing head.

*It's not just the sea life of the oceans that remain mysterious to scientists; there are also sounds that scientists cannot explain with any certainty, either. “The Bloop” may be the most famous underwater sound, captured in 1997 by hydrophones set out by the National Oceanic and Atmospheric Administration (NOAA). It is one of the loudest ocean sounds ever recorded, and while the noise is consistent with a large iceberg fracturing, no one knows for sure what made the sound.

*There are waterfalls in the ocean. Technically the Earth's largest known waterfall lies between Greenland and Iceland — underwater. The Denmark Strait cataract is more than three times the height of Angel Falls in Venezuela, which is considered Earth’s highest aboveground uninterrupted waterfall. The Denmark Straight cataract carries almost 2,000 times the amount of water of Niagara Falls at peak flow.

*The oceans are rich with more than just marine life. Undissolved gold is in and on the seafloor. Mining for this gold — located at least a mile or two underwater and encased in rock — may not be worthwhile, as there currently isn’t a cost-effective way to mine or extract gold from the ocean. NOAA estimates that if all of the gold were extracted from the world's oceans, each person on Earth could have nine pounds of the precious metal.

*More historical artifacts lie in the ocean than in all of the world's museums combined, says National Geographic. Whether it's a Viking sundial or a jeweled gift to the ancient gods, a lot of the world's history can be found at the bottom of the seas. That's not to mention the vast number of shipwrecks lying on the ocean floor; one estimate by James Delgado, director of NOAA's Maritime Heritage Program, puts the number at one million, with the majority of the wrecks still undiscovered.

Now that you know a little more about our oceans, take time to read the Quirkles book, Underwater Utley, and learn how sea life adapts to marine habitat. On a sobering note, also conduct Underwater Utley’s Oil Spill Investigation to learn how oil spills and pollution affect sea life. Watch our video to learn more. 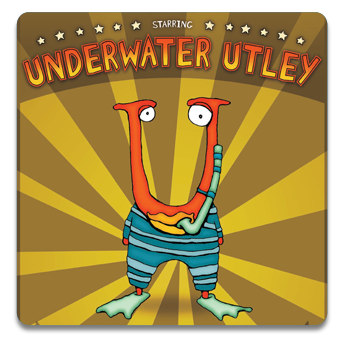