To understand how thrust propels an object

Thread the string through the plastic straw. Have the helpers hold the string, about ten feet apart, making sure the string is taut and straight so there is no upward or downward slope (or tie the string to something). Blow up the balloon (this is the part that’s like filling a rocket engine with fuel) and pinch the opening with your fingers to keep the air inside (don't tie it off). While pinching the end of the balloon, secure it onto the bottom of the plastic straw with a few pieces of tape. Pull the full balloon with the straw to one end of the string, so that its opening faces in the opposite direction from the clear line of string ahead of the balloon. Let go of the balloon, then release its opening.

Even though you did not fill the balloon with rocket fuel, it is able to propel forward. In fact, the balloon is so light that all it needs is a jet of air to create enough thrust to get it to move through space. All rockets work by shoving gas out of their nozzles rapidly. This pushes the rocket in the opposite direction. Apollo 11 was the first lunar landing mission. It was launched on July 16, 1969 with the crew of Neil A. Armstrong, Edwin E. Aldrin, Jr, and Michael Collins. 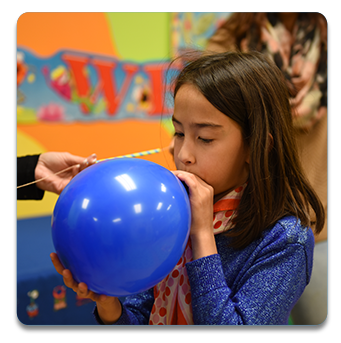