Fill the glass about three-quarters full with water, and center the pie pan on top of the glass. Place the tube upright on the pie pan directly above the water. Carefully set the egg on top of the cardboard tube (point side down). With your writing hand, hit the edge of the pie pan horizontally. Make sure you follow through, but don’t hit it too hard.

The egg will go into the water.  Sir Isaac Newton said that an object at rest will remain at rest unless acted upon by a force.  The egg is at rest while it sits on top of the tube.  Enough force was applied to the plate to cause it to fly out from under the cardboard tube. For a very short time, the egg didn’t move because it was already stationary (not moving). But then, the force of gravity took over, and pulled the egg straight down toward the center of the Earth. Newton also said an object in motion will remain in motion unless acted upon by a force.  The glass of water interrupted the fall. 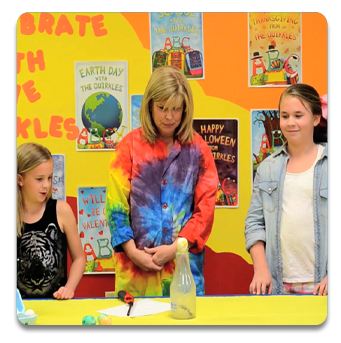